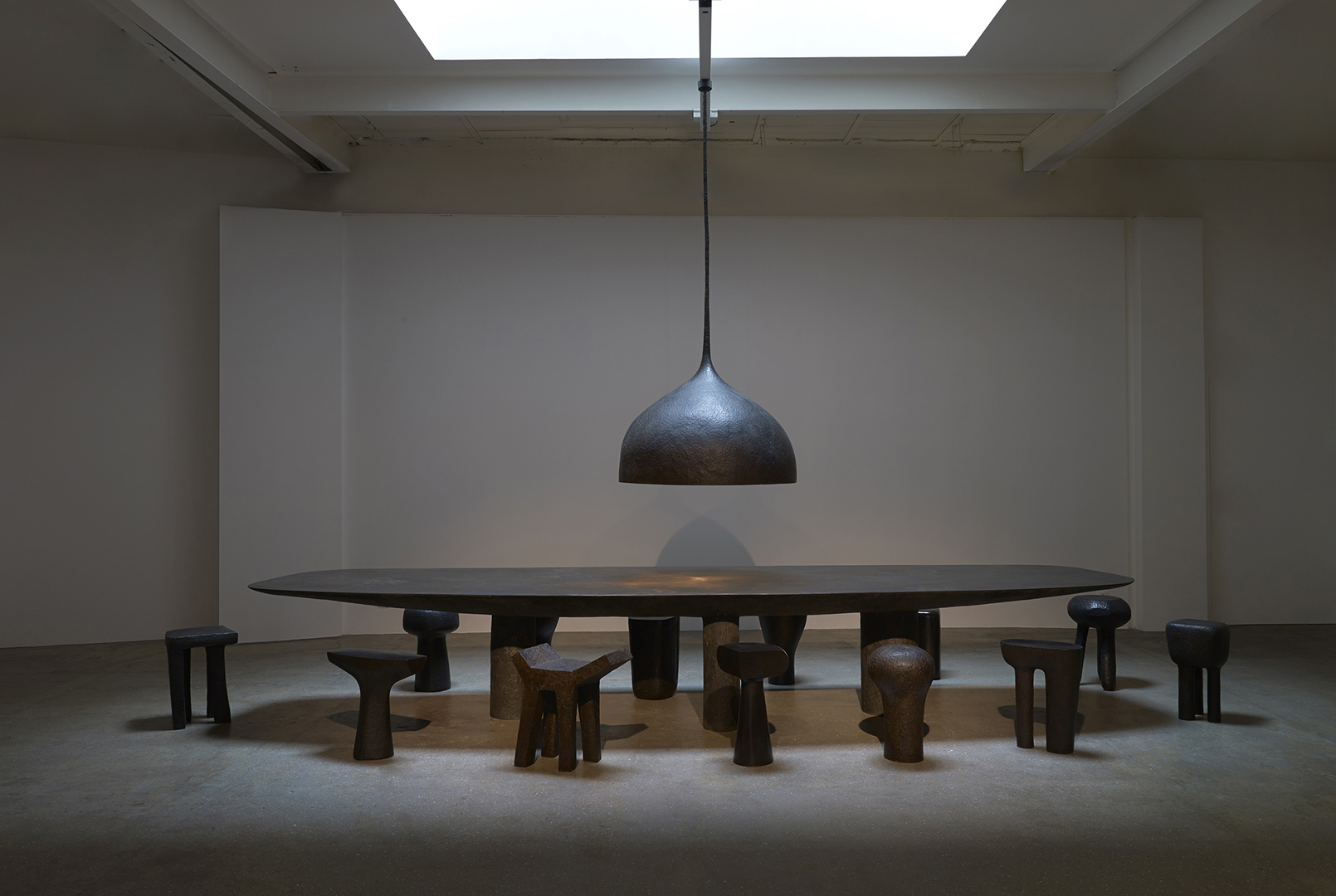 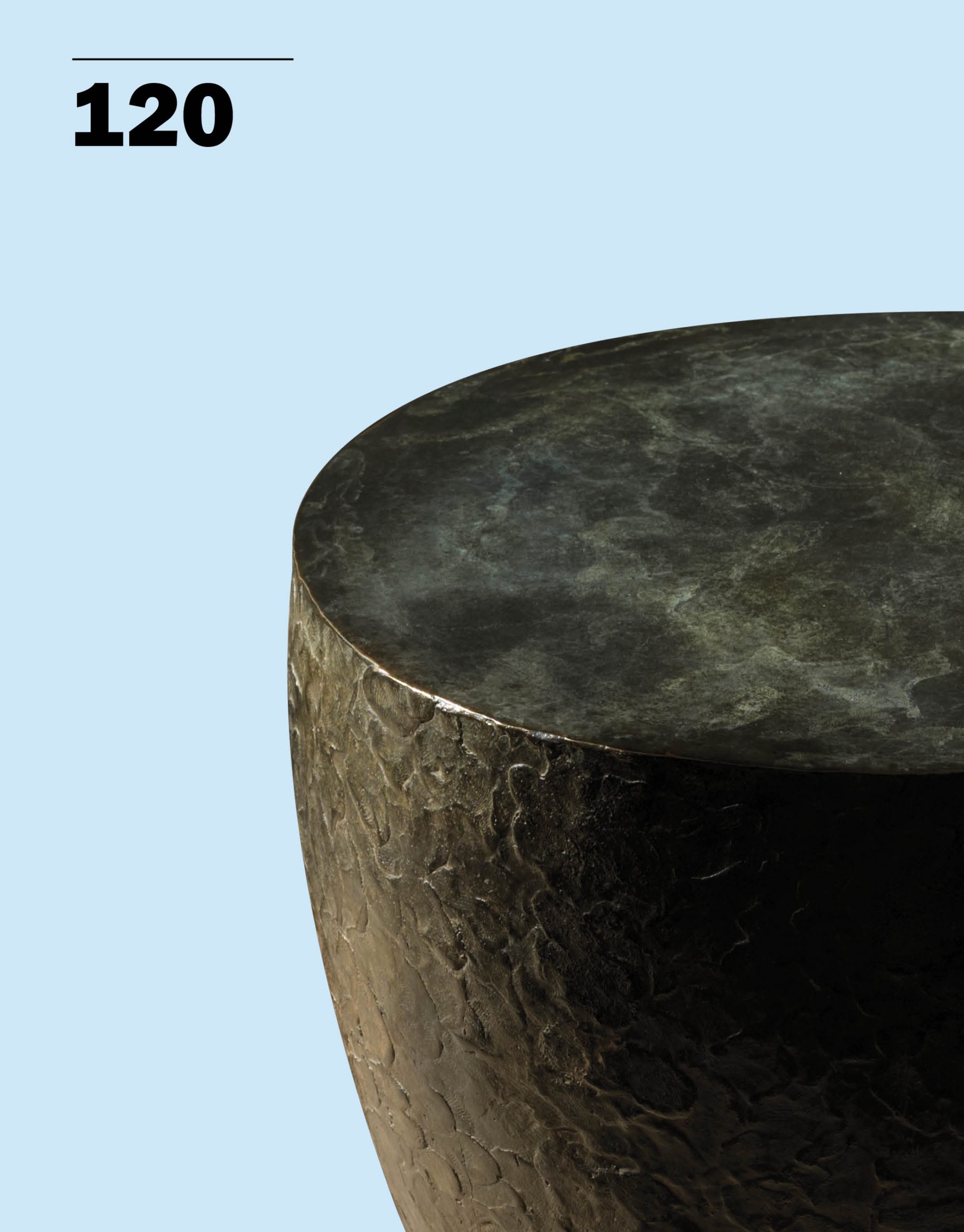 – Bronze mass for the Present Time –

In the beginning, there was stone. In 2002, while staying at the Villa Medici in Rome, Guillaume Bardet transformed 18 tonnes of Carrara marble into Mobilier immobile [Immobile furniture], nine pieces including a chaise longue which is as ethereal as its material is unwieldy...

– Bronze mass for the Present Time –

In the beginning, there was stone. In 2002, while staying at the Villa Medici in Rome, Guillaume Bardet transformed 18 tonnes of Carrara marble into Mobilier immobile [Immobile furniture], nine pieces including a chaise longue which is as ethereal as its material is unwieldy. In Rome, the young designer marvelled at the city’s soft, soothing light; the experience was to change the life of this young man who was born in Rouen in 1971 and graduated from the École Nationale Supérieure des Arts Décoratifs in Paris in 1999. In 2009, he left Paris’ grey skies to move to the beautiful light of Dieulefit in the Drôme. He came up with the mad and self-imposed task of drawing one item per day for a year, whilst living on his own, to produce a total of 365 drawings. It was simultaneously a dizzying challenge and an incredible pleasure. He made these items using earth, alongside local potters from the Drôme, to create the L’usage des jours [Daily usage] exhibition at the Manufacture de Sèvres in 2012 (1). And then? Was he to be known for a single, solitary accomplishment? He chose to continue living in solitude in his home in Dieulefit, taking refuge in drawing. Having amassed notebooks with 600 sketches, he photographed them. “A supply of free forms with a little bit of everything” without any notion of obligation to begin with. Then the idea of using bronze took hold. He realised that he was following the planet’s historical periods: the stone age, the earth age and, at last, the bronze age. Bronze became an “epiphany of marble and earth”, something to work like a mass for the present time, for a Fabrique du présent [Present-day factory]. At the nearby Barthélémy Foundry in Crest, he learned how bronze figures are initially made using wax. He bought 50 kilos of wax and began working. Through his decision to circumvent the process, he rediscovered “the power of his sketches in wax”. The first object he created was an everyday cup from an impression of an Amora glass – fragile, wonky, sturdy. Then he shaped other models in wax, with polystyrene casings: a long table, stools, pitchers, benches and lamps, always playing with different light. He listed to the radio station France Culture, read and wrote; as part of a ritual of direct and indirect thought, his actions became intertwined with the words and the world’s workings. He enjoyed the total freedom available to him, as the artist he had become, without ever forgetting his time as a designer.
His pieces, which all evoke a particular usage, made their way around his workshop before finding their rightful place. And so a timeless and unchanging scene was created with a long table, stools, bottles and glasses. He saw it as a metaphor for the Last Supper. The Last Supper? Guillaume Bardet was hesitant to use this religious and artistic symbol, which he saw as taboo. He’s not religious and didn’t want to offend anyone.

But having listened to René Girard, the religious anthropologist who focused on desire, he understood that the Last Supper can also represent faith in humanity. Slowly, he developed an idea for his own Last Supper. It would express what remains of the cyclical nature of Mankind’s humanity, with thirteen stools to represent the apostles, human beings in all their diversity, from redemption to betrayal. He gave himself permission to call this universal, earthly and informal banqueting scene La Cène [the Last Supper]. Back at the foundry in Crest, a successful and welcoming organisation, the time came for the most exciting stage of the process. His work became solid pieces of glittering bronze. He learned everything he could about the process. Most importantly of all, he witnessed the magical process of bronze being poured into moulds, every Monday: the alchemy of the glowing metal inspired him to create a perfectly polished lamp. This was followed by the carving process, before he used various nitrates to create a patina finish. He spent hours polishing his enormous table, poured in 6 pieces, weighing 900 kilos and measuring 4.75 metres: a challenge within a challenge. He created a landscape of “wonky and powerful, fragile and long-lasting” pieces. He lived in a bubble, between his workshop and the foundry, taking the time to create and to wait, a perfectionist on the hunt for just the right imperfection. Now, Galerie kreo is to exhibit part of his Fabrique du présent [Present-day factory], La Cène [The Last Supper], already displayed in wax at Le Corbusier’s Couvent de la Tourette in 2017 (2). An oblong black table, uneven, huge but with a smooth table top, in bronze tones, with three solid and different table legs; thirteen expressive variations of black stools; black, dented and damaged bottles and glasses, with flashes of gold and other colours. And an enormous lamp which balances out the physicality of the composition of this still life scene which is so full of life and harmonious, which illuminates this call to feast and creates a shared experience. At first glance, these pieces have an archaic feel, moulded by the archaeology of so many recollections. But they also demonstrate the power of the transfigured, contemporary bronze in its brilliant shades of black and with its satin-finished brutality, its movement and asymmetrical shapes which reflect the faltering yet everlasting world in which he uncovers this “uniquely human tremor”. Somewhere between persistent doubts and renewed beliefs. Created by hand, this sensual, fantasy bronze epic is a piece for the long term. Guillaume Bardet has managed to forge and tame both the bronze metal and his soul, with a prolific disquiet of all of his own which has become his strength. 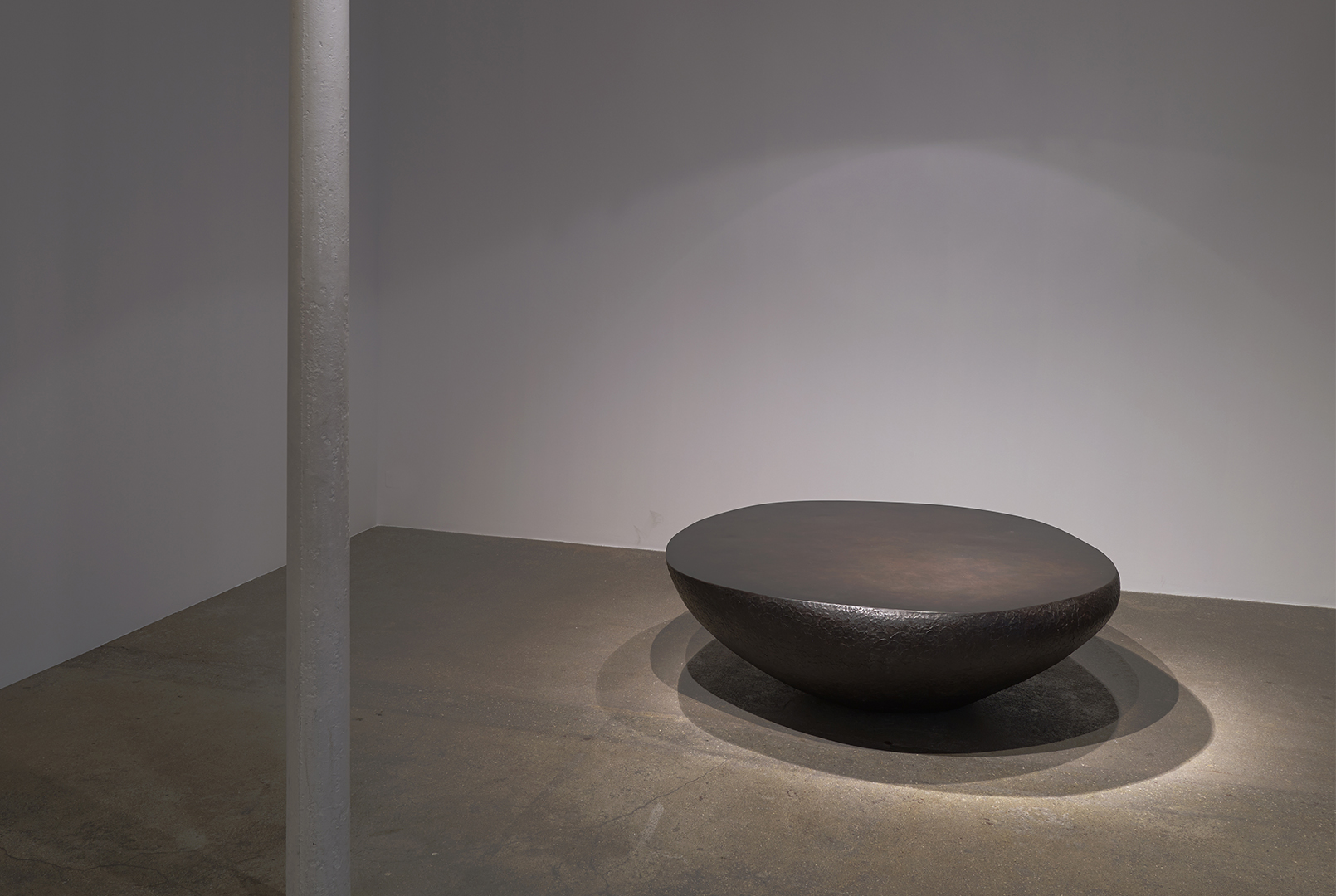 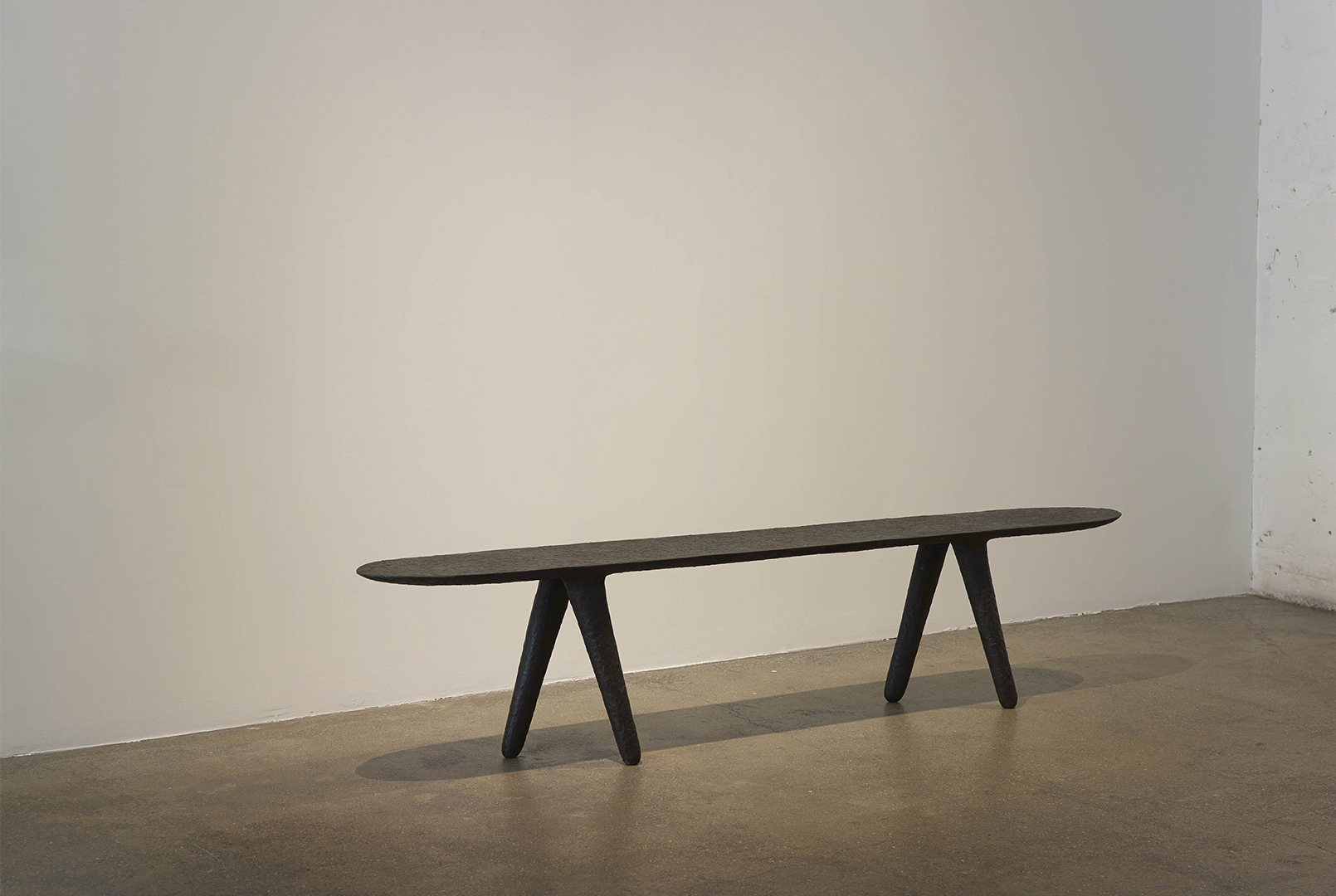 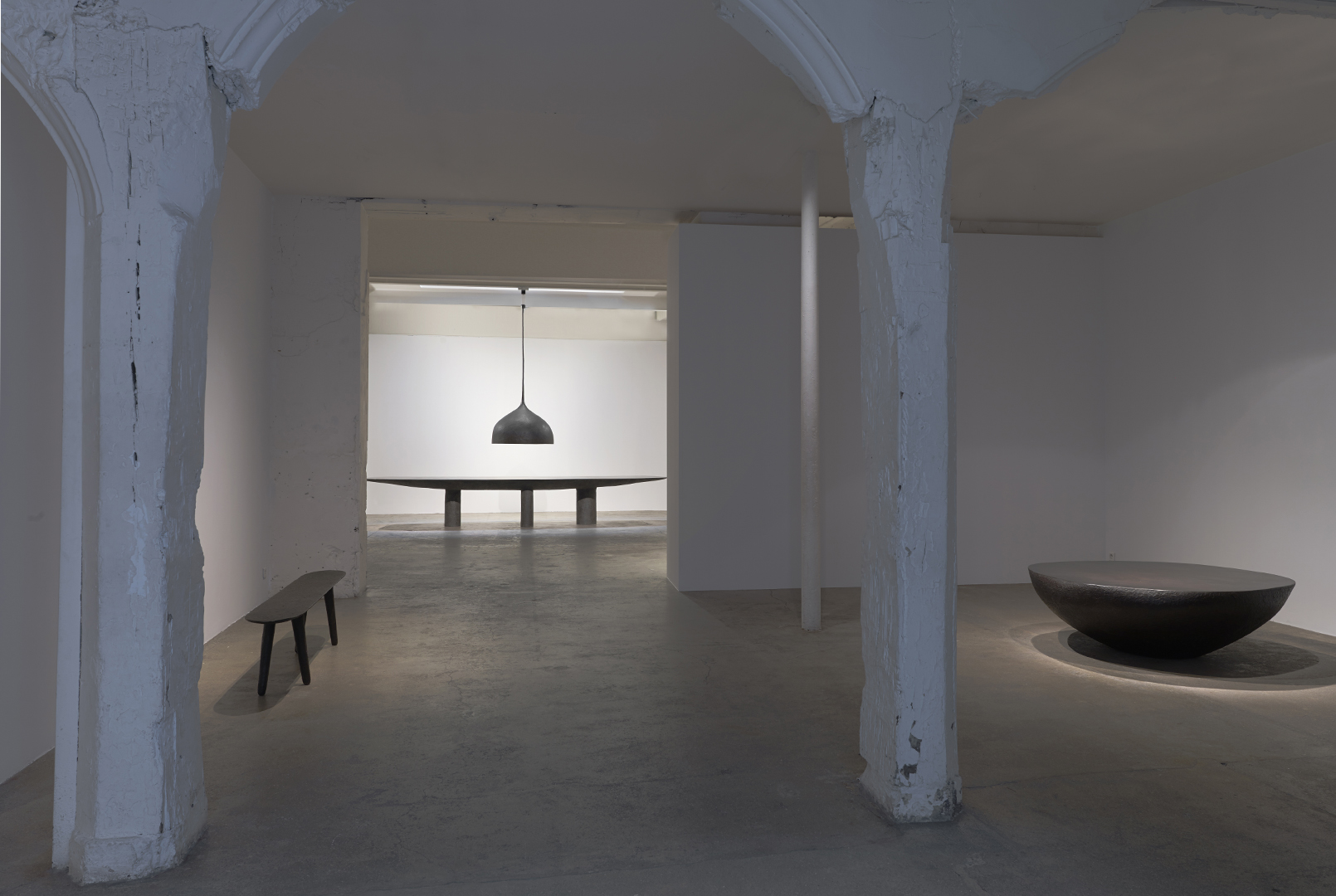 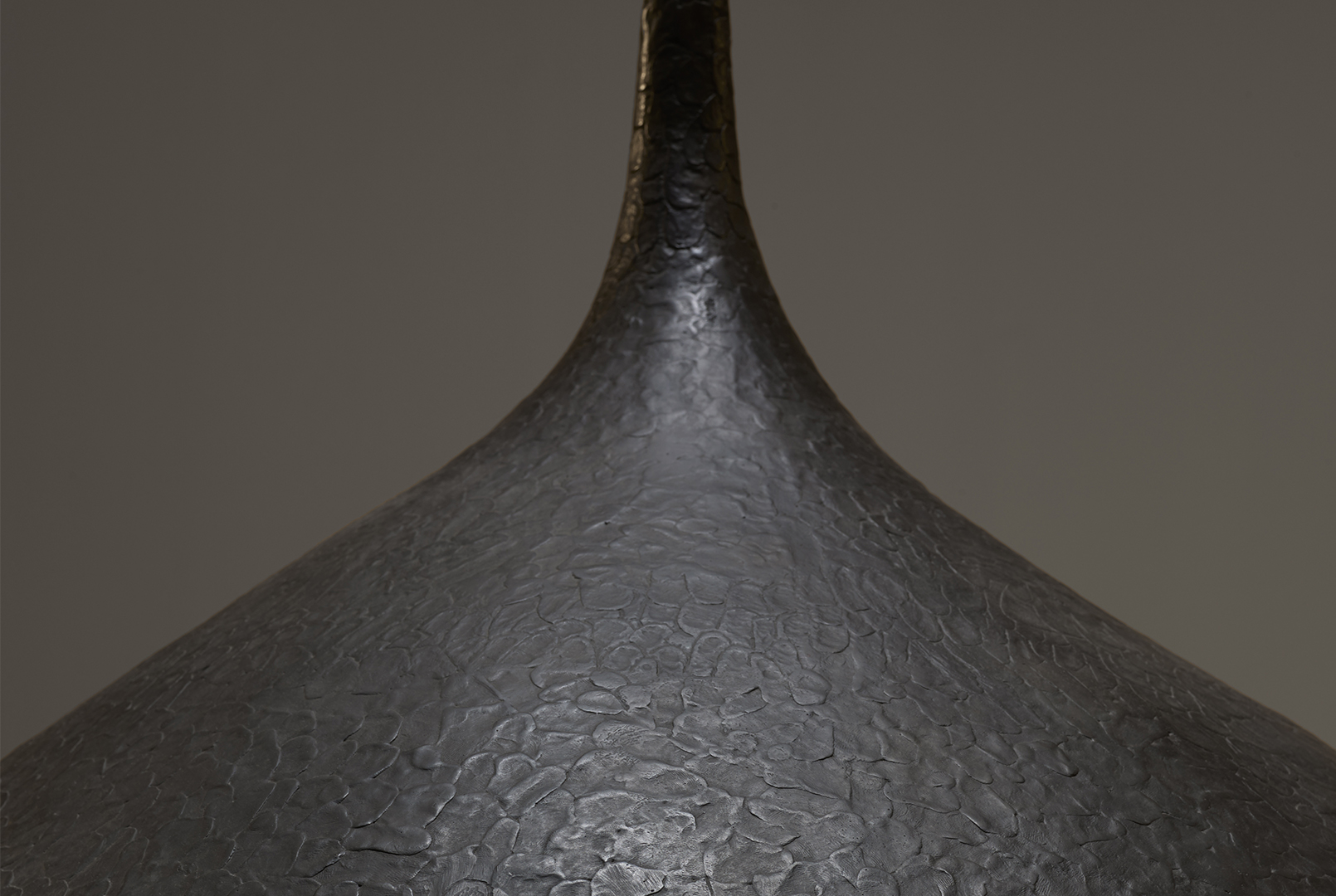 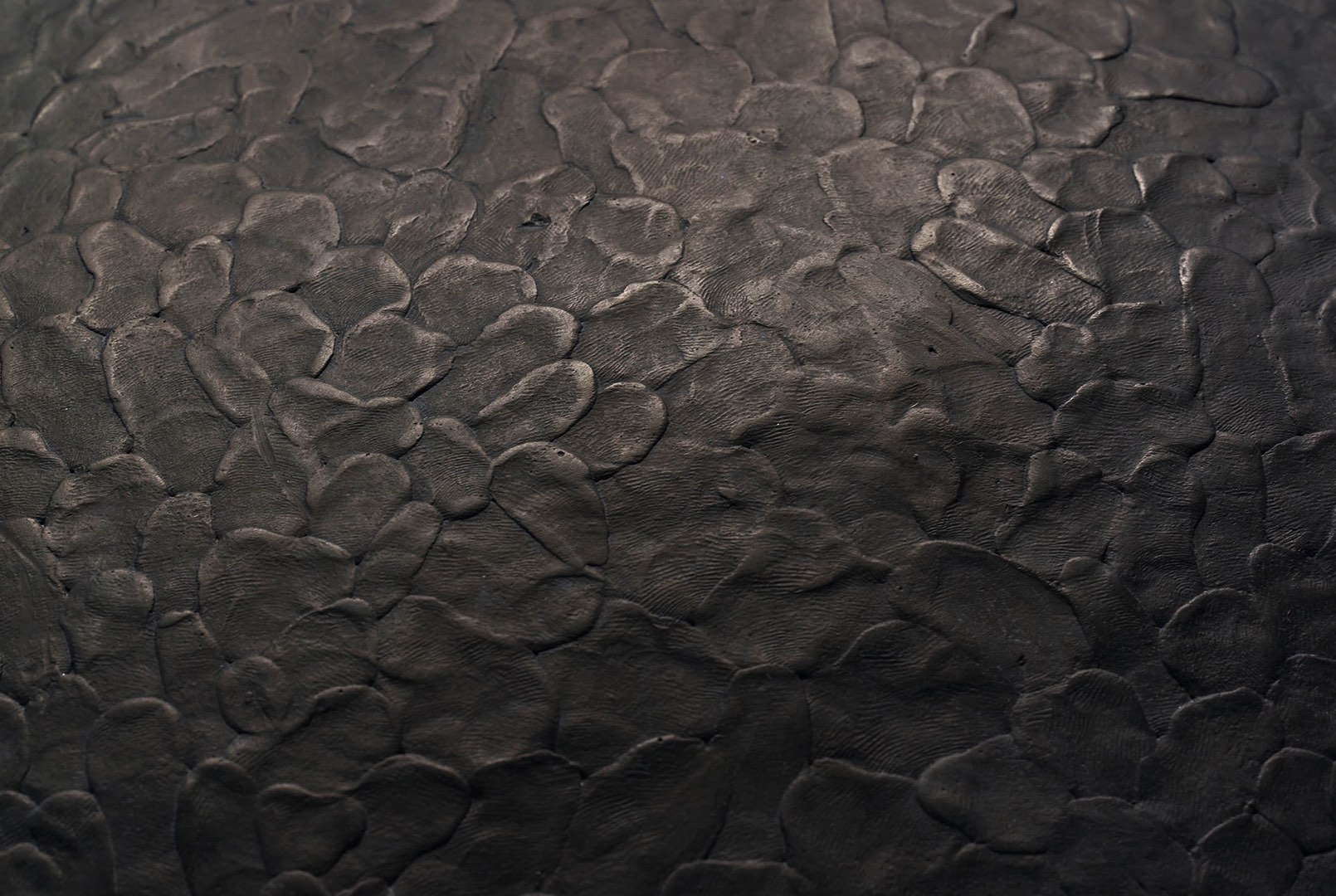 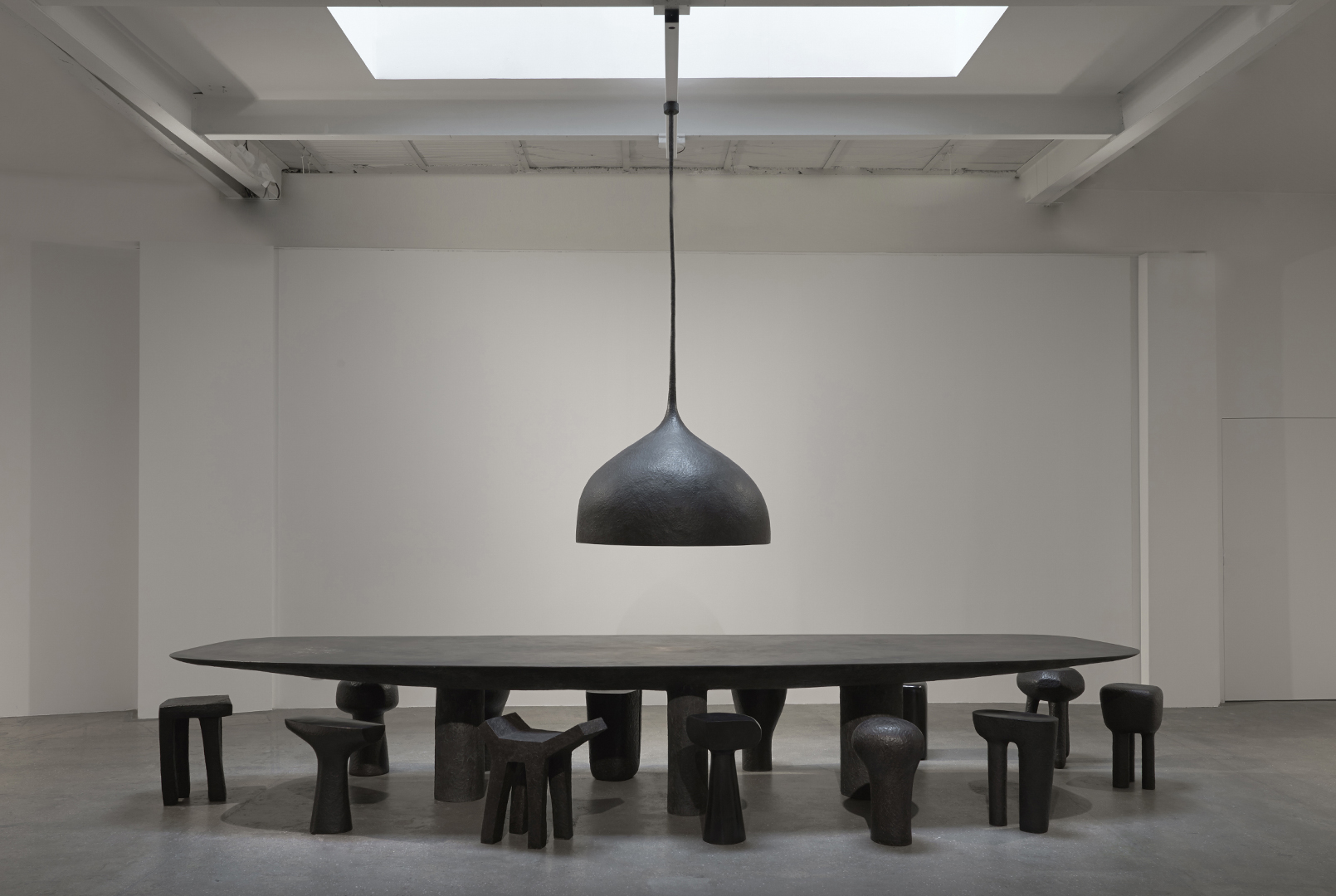 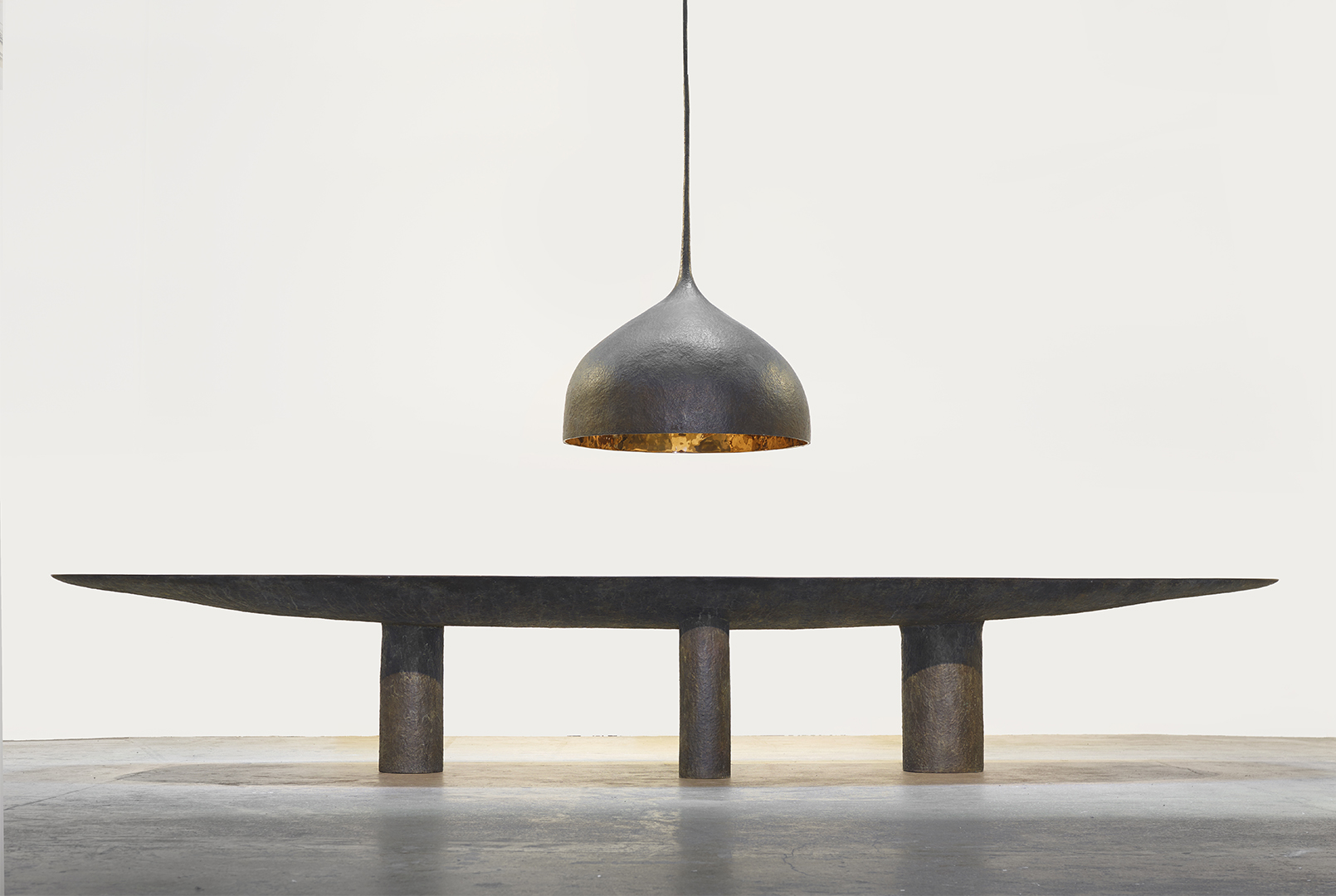 As a child, he used to draw, as he still does. On paper tablecloths, newspapers, napkins and in sketchbooks. He invents forms, as he once did in Rouen, where he was born in 1971, and where he lived until he was fifteen. On arriving in Paris, he kept on drawing, got bored in lessons, attended sculpture classes and dreamt of finishing secondary school so that he could finally do what he liked. His first year studying architecture was hardly convincing, but in 1993, when he began attending the École Nationale Supérieure des Arts Décoratifs (ENSAD), Paris, he knew that he’d found the right place...