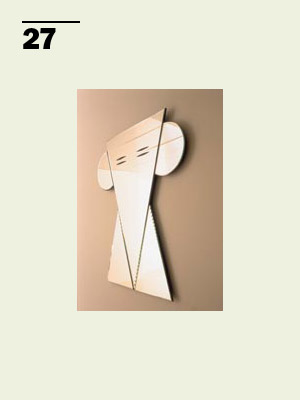 Reflections on the mirror for the new mirrors commissioned from 21 designers:

To begin with, we must insist on the difficulty in defining the mirror, this surface which is saturated with innumerable paradoxes (front/back, light/dark, illusion/truth, feminine/masculine, domestic/public, intimate/social, friend/enemy, virtue/vice, static/nomad, opaque/transparent, solid/ fluid, concave/convex, discreet/decorative, religious/profane …) which in themselves explain the interest it has never ceased to provoke...

Reflections on the mirror for the new mirrors commissioned from 21 designers:

To begin with, we must insist on the difficulty in defining the mirror, this surface which is saturated with innumerable paradoxes (front/back, light/dark, illusion/truth, feminine/masculine, domestic/public, intimate/social, friend/enemy, virtue/vice, static/nomad, opaque/transparent, solid/ fluid, concave/convex, discreet/decorative, religious/profane …) which in themselves explain the interest it has never ceased to provoke.

Among these confrontations, lets deal with the feminine and the masculine first.

The mirror is present at every stage of the life of a woman, companion to her feminine desires, (Le maquillage des lèvres, an erotic Papyrus of Turin, Musée d’art égyptien), pleasures and secrets. In ancient times it was part of the funerary rite, bearing witness to the refinement, elegance and beauty of the dead woman. In the middle ages, the mirrors were referred to as « demoiselle » or « valet », or hidden in ivory sculpted valves. An extension of the body, the mirror is a silent and positive figure of trust (portraits of Comtesse Castiglione), a refuge, but also wonderful trap (for example Alice’s trip to the other side) which can enslave those who get caught (Luciano Fabro, Les Esclaves, 1994). The design of the portable i-mac in the shape of a giant compact, a sort of « electronic » mirror for 21st century woman is proof of its irresistible power of seduction.

If the use of mirrors was forbidden for men in ancient times, they appropriated it through symbols. Man is in search of inner beauty, of truth, « Know yourself » said Socrates. Mirrors are tools of conscience which symbolise this test of self or of others (Rosemarie Trockel, Cogito, ergo sum, 1988). In the Banquet, the cup which contains the wine, the dappled liquid, this drinkable mirror reveals the truth of the soul, ones own and above all the other person’s soul, « Wine is the mirror of the soul » according to Alcée.

A tool of thought, speculation, the mirror is also a metaphor for philosophical subjects like time, (« Time always reveals evil, like a young girl in front of her mirror », according to Euripides), knowledge, language (« Language makes thoughts visible through voice, with words and names, by shaping the flow that comes out of the mouth , like a mirror or reflected water», said Plato) and space « The mirror pushes us forward, into the future of reflections to come and at the same time, it sends us back in the direction from whence the image comes, the past. This spatial game is a transformation of our situation in time. » said Pistoletto.

Self-knowledge is replaced by a knowledge of the world and the mirror is a common symbol as it reflects the world. It is thus the perfect symbol of creation itself : « God was born from an unseen mirror : the world is a mirror that gets murkier . » Divine mirrors « The Bible is an unstained mirror ». An object of prudence and wisdom with the Speculum, mirror books, mirror encyclopaedia which gather together all the knowledge of the world, the vanity of man who thinks he sees « the shape of the world as if in a mirror ». The mirror can be spiritual and moral with prince’s mirrors, treaties of behaviour and policy which list the codes and customs to which an « ideal » man should adhere.

« Look at the world in which you live (mirror).

Observe the role you play (painting)

Meditate on what you are really (Skull)

The mirror is an eye, a machine which transmits and receives images (Magritte, Le faux miroir, 1928) and symbols.

Optical recreation has arisen from the mirror (Hence the success of catoptric or paraboloidal mirrors), a form of entertainment which appeared with the century of the Lumière brothers, a visionary science which would give rise to the cinema.

In the time of the Pharaohs, the other life was perceived as a universe where faces are inverted. Even though the representation of the mirror is quite rare in Egyptian civilisation, it can be found in The dance with mirrors found in the tomb of Mereouka in Saquarra. This dance scene shows the protective role of the mirror and it’s affinities with the sun, the golden mirror, symbol of energy.

In the West, the relationship between mirror and death is darker. Assimilated with the image of the devil in the Middle Ages, its reflections are dangerous and fatal (the myth of Narcissus), like deafening echoes (Tacita Dean, Sound mirrors, 1999).

Taking into consideration this reminder of the multiple facets of the mirror, what other finalities or symbolism would you like to add ?

In short, given total freedom in terms of materials, uses, of the concept and creation of a mirror « objet » (the format of which would be limited to 80 m) what do you propose?